Who was Edward Milner?

We are very excited about the five storey townhouses we are building on Fountain Drive which are being named Edward Milner Terrace. Whilst researching the site, we discovered that an important and unsung national figure lived on this site between 1865 and 1884. Who exactly was Edward Milner? 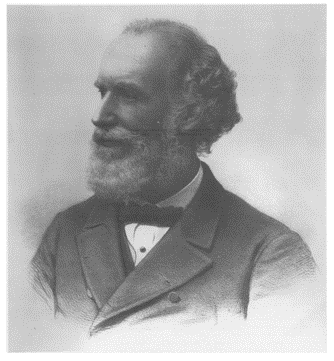 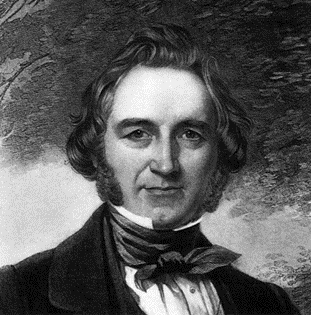 Edward Milner (1819-1884) was a landscape architect and park designer. He had a chance encounter with Joseph Paxton who recognised great potential in Milner’s gardening abilities and paid for him to study at the prestigious gardening school “Plantes Des Jardins” in France. Paxton provided an excellent opportunity to enhance Milner’s raw talents. Milner’s legacy would overflow well into the 20th century.

Sir Joseph Paxton (1803-1865) was a high-profile figure in 19th century British society and was the Head Gardener of Chatsworth Estate at just 20 years old. Paxton had become famous with his greenhouse experimentation which lead to him founding the world-famous Cavendish Banana, and saw him become a member of the houses of Parliament. He was responsible for founding two significant gardening magazines; “Magazine of Botany and Flowering Plants” and “The Horticultural Register” and in 1823 was offered a job at the reputable Royal Horticultural Society. Due to his achievements, he was bestowed with the position of Royal Commissioner to the Crystal Palace and received a Knighthood for this project. 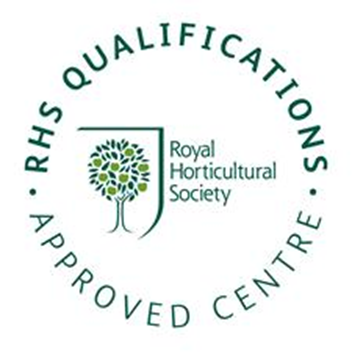 Logo of the Royal Horticultural Society

The Crystal Palace more than anywhere else bears the legacy of Milner’s works. Organised by Prince Albert, The Great Exhibition (1851) was held to showcase the industrial achievements of Britain and was held in the Crystal Palace. Paxton and Milner attended the grand opening ceremony which was presided over by Queen Victoria. Originally placed in Hyde Park, the Crystal Palace was a modern prefabricated glass and steel structure with a huge interior, quite revolutionary for the time. Queen Victoria even remarked in her journal: “This day is one of the greatest and most glorious of our lives.” In the Crystal Palace’s greenhouse blueprint, there is the influence of Paxton who had been experimenting with greenhouse designs. Two of his projects, The Emperor Fountain of 1844 and The Great Stove or Conservatory of 1840 are worth a visit for anyone interested in the inspiration behind the Crystal Palace.

The Crystal Palace seemed to be the representation of modernised Britain. Looking at the photos below, you can see Paxton’s 1834 method in action called the ridge and furrow principle to glaze many of his glasshouses. He developed the system further to improve it in terms of transparency of glass structures, first in the design for the Great Stove in Chatsworth and again at the Crystal Palace.

The Crystal Palace, Sydenham circa 1854 onwards 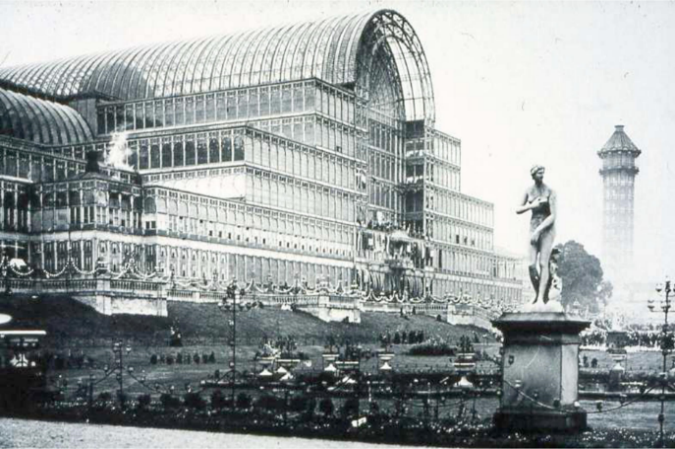 After it was moved in 1852 to its current site, Milner became superintendent of works at the Crystal Palace and Park. In his efforts towards making it unique, Milner supervised the assistant Superintendent Benjamin Hawkins to design the beautiful Crystal Palace dinosaurs (listed buildings) and the palaeontologist Richard Owens to design the sphinxes. Milner personally designed the Italian terraces which provide a nice view of the park and form the pinnacle of what is left of The Crystal Palace. From the Italian terraces, one can look out and admire the beautiful English surrounding countryside feel. As a specialist of Italian garden designs from his days at the Tatton Park project in 1847, Milner had designed the Italian Gardens at the Crystal Palace using this format. After having their fill of the terraces, the water jets protruding from the three lakes were an additional feature quite fit for a beautiful summer’s day for people to enjoy!!

Hawkins’ Crystal Palace dinosaurs; on 31st December 1853, distinguished scientists, newspaper editors and Crystal Palace investors had an eight course dinner inside one of the Iguanodon models. 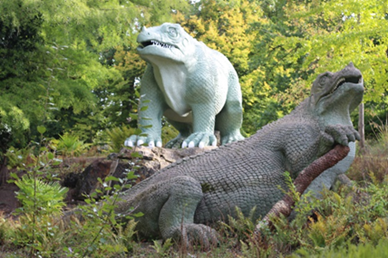 A Floorplan of The Crystal Palace 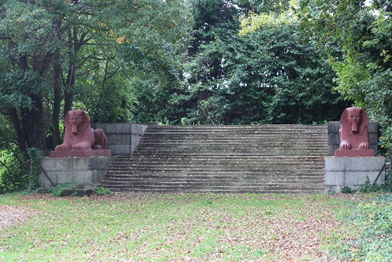 Milner made a significant impact all over Britain which is what makes us admire him. After starting a firm in the 1850’s, he used his Crystal Palace fame to complete schemes for helping out the unemployed during the cotton famine such as Avenham Park in Lancashire. Milner went on to collaborate in many projects with Paxton such as on the Prince’s Park, Liverpool 1843 (a Grade 2 Historic Park by The English Heritage) and The People’s Park, Halifax 1856. One of the most famous projects was the Pavilion Gardens in Buxton. The landscape work at Buxton was important enough that heritage workers felt the need to produce a Discover Buxton website where a person gets into the character of Edward Milner and explains the details of his gardening work to curious audiences!! Another thing to bear in mind is that Milner broadened his horizons by working on projects in Germany and Denmark. As people who are passionate about our local area, we are interested in Milner because he completed many works around Dulwich such as the gardens at Dulwich College or a garden in Dulwich Woods and helped the community all over Britain.

After completing The Crystal Palace, Milner’s works gained greater attention due to his high quality efforts. Throughout the next decades, Milner had a client list which included monarchs and royalty all over Europe. The history record is silent on specific details but these foreign dignitaries included people such as Count Festetics and King Oscar the second of Sweden. He worked on other famous sites such as the recreational gardens at St. Paul’s Cathedral in 1878 which by this point was probably the norm for Milner and his son who were rubbing shoulders with the likes of Joseph Chamberlain (the father of Neville Chamberlain). Indeed, the decision by Milner to send three of his children to the prestigious Dulwich College, essentially ingrained the Milner family into the fabric of Dulwich life and increased his notability. Milner and his oldest son Henry even ended up designing the gardens at Dulwich College for the estate architect Charles Barry Junior whose father Charles Barry was also a royal commissioner for the Crystal Palace. Due to Milner’s abilities, he was able to retain these relationships with important business contacts of the newer generations and this trend carried on into the 20th century. 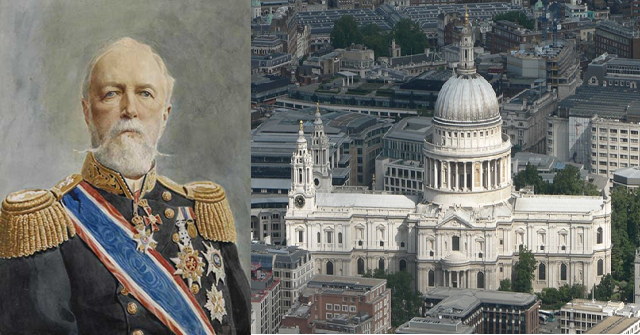 If you have been checking out our website, hopefully you will have looked at the timelapse video which we have put up of Fountain Drive. This road was in fact named after a drinking fountain which stood in the Crystal Palace Parade nearby. Milner was living in nearby Anerley Road in 1861 and then moved into Fountain Drive around 1865. He ensured the house maintained his own sense of pride by naming it Hillside after the area in Derbyshire where his lineage hearkened from. As he was the first resident, Milner designed the house to personally suit his own designs. Milner spent the rest of his life in this house. This is best illustrated in his pulhamite (a man-made rock) grotto which was a material which Milner frequently used from a company called Pulham and Sons. His grotto creation has inspired our idea for communal gardens which we hope will create a community spirit in a similar way to the community he created from his various park designs.

Milner’s appointment as the Principal of the Crystal Palace School of Gardening kickstarted the Milner dynasty. The turning point was the appointment of his son Henry Ernest Milner to the role of principal assistant which ensured the relevance of Milner’s work even after his death. Considering that it was one of the first schools of gardening, Milner discernibly cared about landscape gardening as an academic discipline and spreading it to new generations. Milner’s successes encouraged him to create a partnership with his son which became Milner and Son in 1881. Henry’s daughter married a man called Edward White and the partnership became Milner, Son and White in 1901. The Milner and White family continued rising to greater levels of prominence through their links with famous people and important events such as The Earl’s Court Exhibition in the early 1900’s or Edward White’s role as a director at the Chelsea Flower Show in 1913. I hope this blog sheds light on Edward Milner’s contributions to Britain which should not be underestimated. After all, Milner did leave a legacy of a landscaping company which became at some point the largest and the oldest in Britain and lasted until 1995 as Milner and Partners.